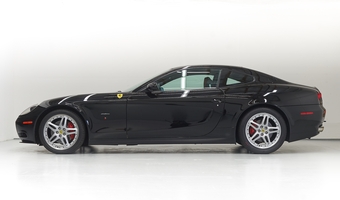 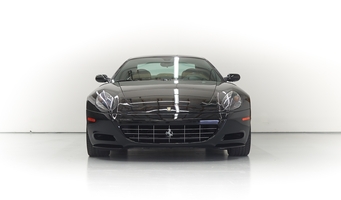 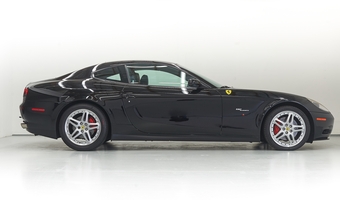 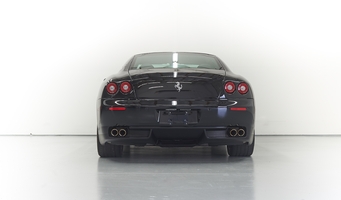 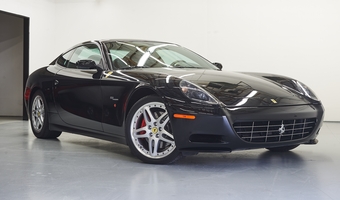 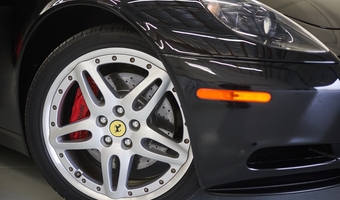 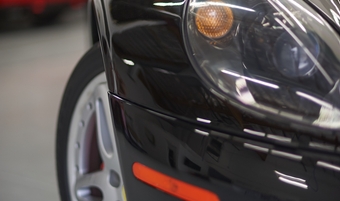 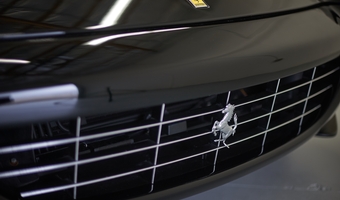 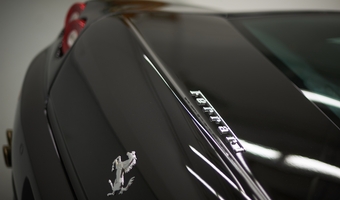 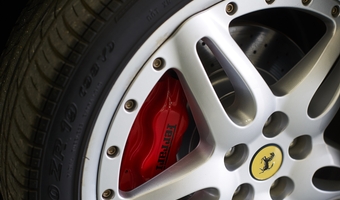 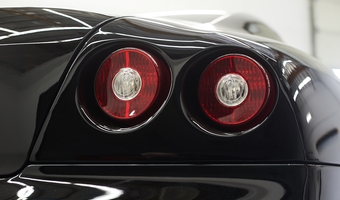 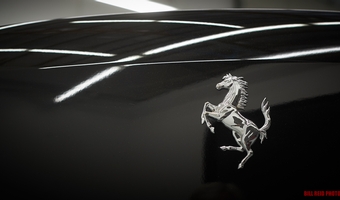 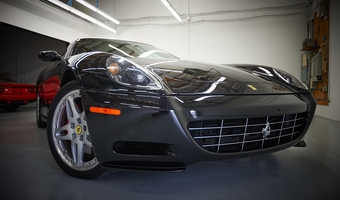 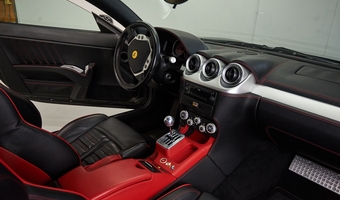 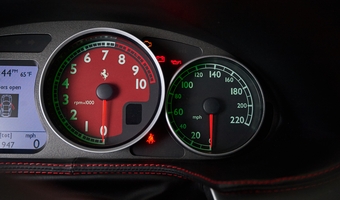 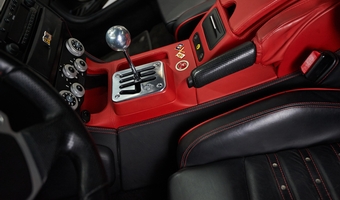 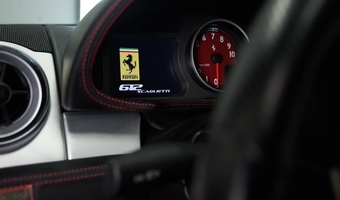 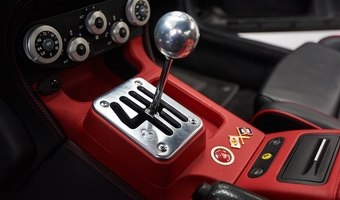 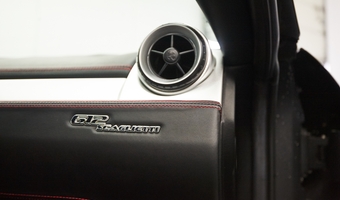 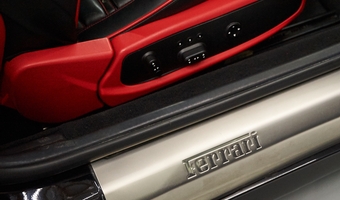 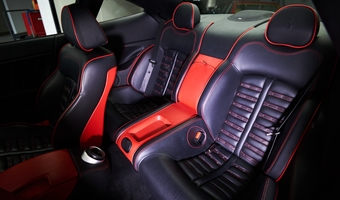 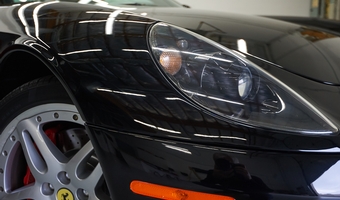 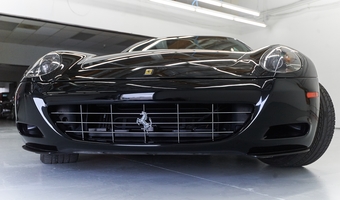 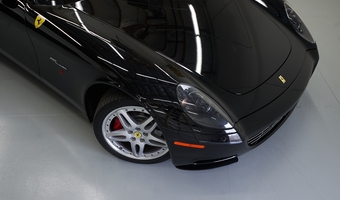 The car offered US Model, VIN#, ZFFAA54AX50138865, 2005 Ferrari 612 Scaglietti manual finished in black over black with red accent interior. This well documented car has travelled 22k miles from new. The car presents itself as nearly new, with minor wear throughout consistent of a well cared for Ferrari. Please see clean Carfax and photo library.

This car was delivered new to Algar Ferrari in Philadelphia in late 2004 to its 1st owner. It lived most of its life between Florida and California. The service history is extensive, especially from 2008 until 2015 when it accumulated most of its 22k miles. Most of the services were completed at The Collection in Coral Gables or Ferrari Maserati of Fort Lauderdale including a major service at FMFL 2,000 miles ago.

The exterior is 100% stock, the body is corrosion and rust free. The wheels are original and are in excellent condition and sport new OEM Michelin Pilots. All exterior lighting, signals, brakes are operational. The car has all of its factory glass intact as well. The car is nearly blemish free and is ding free. All the exterior and rubber and plastic is in excellent condition.

The Interior of the car is exceptionally clean. It appears that the backs and rear facing seat were never used. The leather and carpet is in excellent shape and shows very little wear. The driver seat shows minimal wear on the side bolster. The dash shows very minor shrinkage at the air vents. The A/C blows ice cold. All lighting and controls are operational. The original manuals are included, as is the original and factory key. The head unit is the original Ferrari with trunk mounted CD player, the factory alarm is functional. The OEM spare wheel/tire, 2 factory keys, jack, tool and roll are all intact.

The engine bay is very tidy without having been detailed. The car has a feel of one that has always been inside and maintained well. When we purchased the car, we made note of anything that wasn't working properly and took the car to Capitol City European, a marque specialist. They diagnosed and remedied any and all issues including a service and inspection.

The Ferrari 612 Scaglietti (Italian pronunciation: [ska???etti]) is a 2+2 coupé grand tourer manufactured by Italian automobile manufacturer Ferrari between 2004 and 2010. It was designed to replace the smaller 456; its larger size makes it a true 4 seater with adequate space in the rear seats for adults. The design, especially the large side scallops and the headlights, pays homage to the coach built 1954 Ferrari 375 MM that director Roberto Rossellini had commissioned for his wife, Ingrid Bergman. The 612 is Ferrari's second all-aluminium vehicle, the first being the 360 Modena. Its space frame, manufactured in collaboration with Alcoa, is made from extrusions and castings of the material, and the aluminium body is then welded on. The chassis of the 612 formed the basis of the 599 GTB flagship grand tourer. The 612 Scaglietti shares its engine with the Ferrari 575 Superamerica - despite the name's suggestion that it is a six-litre V12 the displacement is actually 5,748 cc (5.7 L). The engine has compression ratio of 11:1 and enables the car to attain a top speed of 323 km/h (201 mph) and accelerate from 0-100 km/h (62 mph) in 4.2 seconds. Two choices of transmissions were available on the 612, a 6-speed manual or the 6-speed semi-automatic paddle shift transmission designated the F1A, a much refined version of the F1 transmission used in the 360. Production The body of the 612 was produced at Ferrari's Carrozzeria Scaglietti plant, the former home of the car's namesake coachbuilder in Modena, Italy. It was then taken to the Ferrari factory located at Maranello and the V12 engine along with the interior were installed. A total of 3,025 cars were produced, with only 199 equipped with a manual gearbox. In 2007 Ferrari announced the availability of the SuperFast robotic (F1) gearbox and a new electrochromatic glass roof that could tint and lighten at the push of a button for the 612. In early 2008, at the Geneva Car show, Ferrari unveiled the One-To-One (OTO) personalization program and thereafter the 612 was only be available through this special order process. The OTO program took the catalog of options under the existing Carrozzeria Scaglietti Programme a step further. Clients hand-picked a wide variety of options from leather swatches to brake calipers and everything in between. Although the OTO program was launched on the 612 Scaglietti, it was broadened to the entire Ferrari range in due course. The example here is very rare indeed, 1 of 199 manual cars built out of a total production of 3,025, of those only 60 came stateside.